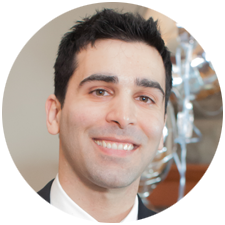 Lamar Hanna was born in Windsor, Ontario and attended graduate school at Wayne State University for his Doctor of Pharmacy degree.  During his time as a student, Lamar was an active participant in the Kappa Psi Pharmacy Professional Fraternity where he became certified as a CPR instructor for the American Red Cross, teaching hundreds of pharmacy students this life-saving technique. Lamar also was the recipient of the Natural Medicine Award in his graduating year and has continued to educate himself in many different areas post graduation to serve his patients better.  Upon graduation, Lamar obtained pharmacy licenses in both Ontario, Canada and Michigan, USA.

After graduation, Lamar relocated to the beautiful city of Sarnia in 2010 and worked for a major pharmacy chain but soon realized his true passion was to open a pharmacy and run it the way he felt would benefit the patient the most.  He teamed up with his wife Jessica, who was also a pharmacist, and opened up Centrepoint IDA Pharmacy in 2012.  Since then, Lamar has never stopped in his quest to make the patient’s experience at his pharmacy the best it can be.  He has implemented several innovative programs such as immunizations beyond the flu, in-store warfarin/Coumadin INR testing, cholesterol testing, a weight-loss program and much more.  Due to his keen sense for customer satisfaction and superb business skills, Lamar was the recipient of the Sarnia Chamber of Commerce Young Entrepreneur Award for 2015.  He then went on to receive the Sarnia Chamber of Commerce Outstanding Customer Service Award (Small Business) in 2016 with his wife Jessica.

In 2014, Lamar was struck with a rare illness called Autoimmune Hemolytic Anemia that left him in the ICU for 4 days and in Victoria Hospital in London, Ontario for 23 days total.  During this time, 10 blood transfusions helped doctors keep him alive long enough to cure his illness.  Since this tragic event, Lamar is dedicated more than ever to help his patients achieve their health goals and he has taken on a new mission to spread awareness for blood donation and become an advocate for rare diseases.  He is currently a volunteer with Canadian Blood Services and has hosted several events at the pharmacy in their honour as well as hosting events for other rare diseases such as PANDAS disease and Cystic Fibrosis.  Lamar also volunteers at his local church and is an active member of the Knights of Columbus in Sarnia.  From this experience, Lamar not only understands what it is to be an exceptional pharmacist, but also to be a patient – and he wants nothing more than to help those in need the same way he needed help when he was ill.  This is where their concept of “Let Our Family, Take Care of Your Family” has taken on new life and is their ultimate mission.